On May 19, 2020, Fahrusha spoke with Thiago Ticchetti from Brazil about UFOs. His new book is called UFO Contacts in Brazil and it is his first in English. It is over 500 pages long and is replete with many amazing photos and illustrations. He has written ten other books in Portuguese all about UFOs or OVNI as they are referred to in Spanish and Portuguese. People in the English speaking world may have misconceptions about UFOs in Latin America because of language issues.

Thiago explained that a recent report about a crashed saucer just north of Rio de Janeiro in the town of Mage was a total hoax and he tells us exactly why.

He has been interested in UFOs since childhood and he tells us about an early sighting he had. His father was an officer in the Brazilian Air Force and allowed him to sketch from the photos of the classified files of the Brazilian government. Later he was very inspired by the work of both A J Gevaerd, a Brazilian ufologist, and Jacques Vallee a French-American writer on the subject and physicist.

We discussed the various types of beings seen in Brazil, the most common of which is a variation of “the greys” well known in the US. These have a white pallor and different faces. The first famous abduction case in Brazil was that of a farmer named Antônio Villas Boas (1934–1991) whose case occurred in 1957 and included a sexual interaction with a female being. It occurred several years earlier than the Betty and Barney Hill abduction in 1961 in New England.

Children in the Sagrada Familia neighborhood had a credible sighting of a cyclops robot that came out of a UFO. It was credible because the otherwise adventurous kids totally changed their habits after their terrifying experience.

We also talked about the Varginha Incident and what happened on the island of Colares, which killed a number of denizens.

Thiago Luiz Ticchetti is an adherent of the “nuts and bolts” theory of UFOs, believing they come from other worlds in space. 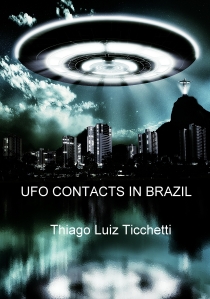 Fahrusha is the host of “Shattered Reality Podcast” and welcomes your comments public and private. Email private comments to fahrusha@fahrusha.com. Thanks for listening. This episode was recorded remotely outside of our normal recording studio as we are in COVID-19 lockdown. We are trying to continue to provide you with commercial free content in this very difficult time. Please excuse any glitches you may hear.